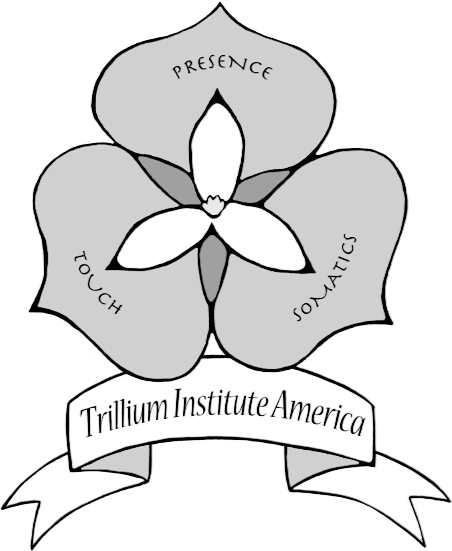 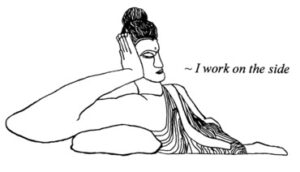 Why I Work on the Side: A Quiet Evolution in Bodywork – Jack Blackburn

I feel like I have been holding on to a big secret since 1987. I hope that you will be able to feel my ardor and enthusiasm in this article. It is rare that I have had the opportunity in my life to develop something new and find out that it really works well, so well in fact that I think it may change the way bodywork is viewed and practiced. Others have been uncovering the same secret in their own work. Sssh! The secret is that side-lying is easier for the practitioner, more comfortable for the client, and incredibly effective!

+Over the years, having given thousands of sessions, I realize that side-lying offers so many advantages that it could arguably be used in every session, not only in Trager but also in every school of bodywork. Here are some of the advantages that I found:

+Most clients, when properly bolstered, are more comfortable and less resistant when lying on their sides.
+Clients who have been abused usually feel much safer, less vulnerable in the semi-fetal position that side-lying offers.
+Gravity can be used to great advantage because of the way it loads the joints and muscle tissue, hips, shoulders, abdomen.
+The therapist benefits from all the positioning advantages and thus doesn’t have to work so hard.
+There is comparatively little body surface in contact with the table so one can introduce movement with very little effort. Like a pendulum, the further away a body part is from the table the easier it is to keep in motion.
+The shoulder girdle and hip that is not on the table can be decompressed and tension in the joint released non-reflexively with the help of gravity.
+Small amounts of motion can be transmitted through the joints with very little effort and very pleasurable effect to the client.
+The body in a side-lying position is similar to a piano keyboard with various body parts readily accessible at the same time.
+The body in the sagittal plane is asymmetrical from back to front so you can take advantage of the different way the body moves. For instance, the pelvis and shoulder uppermost move independently of the torso. When any one is put into motion a gentle and freeing torque is created along the spine. 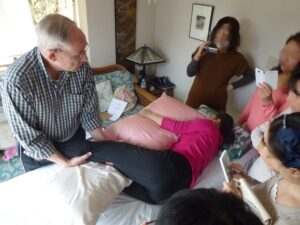